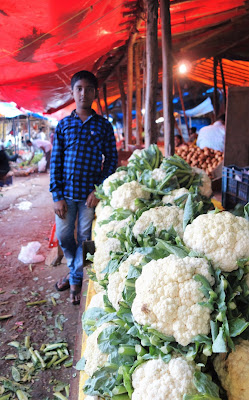 I’m a believer that you can’t have too much garlic or chilli, and this market delivered. Cheap and plentiful and fresh. Mounds of fresh mint, coriander, tulasi, betel leaves, and others that I couldn’t identify. The smells ranged from wafts of rotting produce and other unsavoury unmentionables, to heavenly spices, then drifts of incense, or flowers. The local cows (and a giant bull) were well fed and cruised around doing cow-type things. Tim and I were the only westerners there and we were watched with much interest. Everyone is very friendly and know who the Black Caps are (embarrassing) and lots of people want to say hello.

When we purchased a cauliflower, the owner suggested I take a photo of their son. He was all smiles until I took the photo, which required a serious face, then all smiles afterwards.

This market isn’t far from the apartment, just a quick death-defying auto ride away, so I will be back. I hope one day they will treat me like a local and I won’t feel quite so…. watched.

Indians are Their Own Stunt Doubles

I’ve been reading a bit about India and after the little experience I’ve had here so far, a line from a blog really resonated 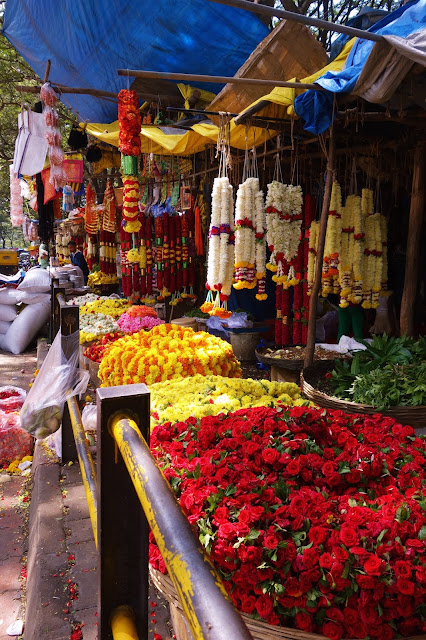 with me: Indians are their own stunt doubles. How true this is. Their traffic is chaotic, every time you travel on the roads, you take your life into your own hands. The living conditions are varied, depending on your status and wealth, but all levels of living require a certain amount of living dangerously.

It really is a nation of entrepreneurs- you need to be able to think on your feet and sell yourself, to put yourself in a better position than the other people around you. At work, I would have more than ten people a week coming in off the street to sell me their product. Whether it is internet, food, recruitment, or e-waste disposal, they turn up and greet me enthusiastically, ardently wanting my business.

Every time I buy something here, I have to give the store my cellphone number. After being here three weeks, I get about five unsolicited SMS a day, selling me everything from shoes, to internet deals, to food, to Diwali gifts. It’s a dog-eat-dog world out there, and you really do want to be on the top. Because here, being at the bottom is unfathomable.

Beggars on the street, variously using their children to sell pens or balloons. Or women simply sitting there with children passed out on them (allegedly drugged to ensure their compliance). Old, wizened women, palms open, looking for a few rupees. Various disfigurements or deformities that would ensure they wouldn’t be able to live productive lives. How do you decide who to give money to? How do I pick between the child selling me pens at the stop lights, or the man who has a half a leg?

This site uses Akismet to reduce spam. Learn how your comment data is processed.

This site uses functional cookies and external scripts to improve your experience.

NOTE: These settings will only apply to the browser and device you are currently using.

We use cookies to give you a better web experience and because they are delicious. We assume you are OK with this if you continue browsing this site. To find out about our cookie policy, please visit our Disclosure and Privacy Policy page.